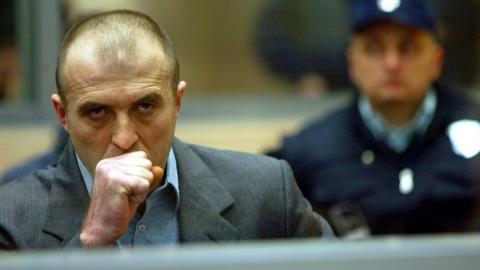 Belgrade Higher Court told BIRN that Zvezdan Jovanovic, who shot dead Prime Minister Zoran Djindjic in 2003, is not eligible to ask for conditional release from prison until the end of 2029, despite a campaign calling for him to be freed immediately as a 'Serbian hero'.

Jovanovic could ask the Serbian president for a pardon, but the request has to be submitted to the court first, and Belgrade Higher Court said that neither he nor anyone acting for him has issued such a plea.

A foundation led by Dragan Vasiljkovic, a convicted war criminal known as Captain Dragan, launched the petition for the release of Jovanovic at the weekend in central Belgrade, where it has been collecting signatures of support.

But Belgrade Higher Court, which sentenced Jovanovic to 40 years in prison in 2009 for killing Djindjic, said that it "has no grounds to act on the petition" under Serbian law.

It said that Jovanovic will be only able to ask for conditional release on December 22, 2029.

Jovanovic was a member of the Serbian State Security Service's Special Operations Unit, which Slobodan Milosevic's regime deployed in the wars in Croatia and Bosnia and Herzegovina and also used for killing political opponents at home.

Vasiljkovic was freed from prison in Croatia in March 2020 after serving his sentence for war crimes, and very soon afterwards started campaigning for Jovanovic to be released.

In interviews on television and in newspapers, Vasiljkovic said that he favours early release from prison for Jovanovic and the Special Operations Unit's commander, Milorad 'Legija' Ulemek, who was also convicted of involvement in the Djindic's assassination, because "they are heroes" who fought on behalf of the Serbs.