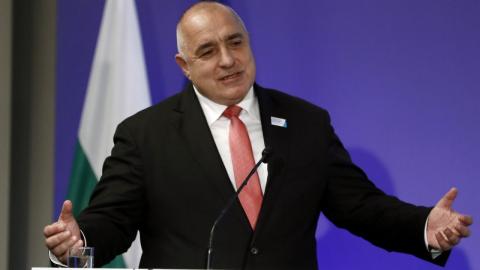 If former Bulgarian PM Boyko Borissov's GERB party returns to power, it will restore friendship with North Macedonia based on the 2017 landmark friendship treaty between the two countries, and support its EU accession, Borrisov told the Bulgarian media on Tuesday.

After meeting the President of the European Commission Ursula von der Leyen, on Tuesday in Ljubljana, Slovenia, Borissov said that he assured her that if his GERB party wins the November elections, "it will continue the policies for EU enlargement towards the Western Balkans".

Borissov recalled that it was his government in 2017 that signed the landmark friendship agreement with North Macedonia, gathering international praise for the move, adding that this should be the basis for solving the ongoing history and language dispute between Skopje and Sofia, which will unlock Skopje's EU perspective.

Despite the friendship treaty, during the last month of Borissov's government, Bulgaria blocked the start of North Macedonia's EU accession talks last year.

It cited disputes over the latter's history, language and identity, which it insisted have Bulgarian roots. Skopje has responded that it cannot compromise over sensitive issues such as national identity.

Efforts by the EU to help overcome the gridlock did not succeed and, with the start of 2021, these efforts were further hampered by Bulgaria's own political stalemate.

Bulgaria has staged two general elections this year that ended that ended with inconclusive results, resulting in inability to form a new government. The November elections will be the third one this year.

Meanwhile the country is led by an interim technical government appointed by President Rumen Radev.

One day ahead of Wednesday's EU...