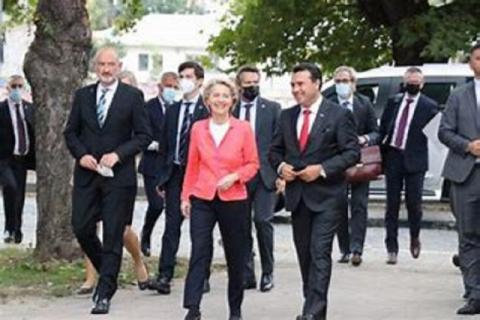 Ahead of an EU-Western Balkans Summit held here on Wednesday, Bulgarian President Rumen Radev reconfirmed his country's reluctance to greenlight Skopje's EU accession negotiations unless North Macedonia honours its commitments to address the moot points in bilateral relations.
Radev said that the Western Balkans' EU entry is a key priority of Bulgarian foreign policy and that his country consistently supports this project based on the principles of own progress in reforms and meeting the accession criteria, and of goodneighbourly relations.
The head of State stressed the need to ensure "clear legal guarantees that Skopje will fulfill its obligations [under the 2017 Goodneighbourliness Treaty with Bulgaria] before Sofia agrees to support the start of EU accession talks with the Republic of North Macedonia".
In his remarks, the President emphasized the rights of North Macedonia citizens who identify as Bulgarians and said that 120,000 residents of North Macedonia hold Bulgarian passports.
He said that the "Bulgarian cultural and historic heritage in North Macedonia is a sensitive issue for the Bulgarian people" and slammed what he called "the supplanting of this heritage". Radev cited a recent example of a monument in southern North Macedonia, whose original inscription in standard Bulgarian had been replaced, entire passages of the original text had been removed and some of the rebels' names on it had been changed.
"Bulgaria can't give a green light to North Macedonia's EU accession for as long as it continues the systematic destruction of the Bulgarian historical heritage. Our positions are clear: while this process [of destroying the heritage] continues and fundamental rights are suppressed, we can't say 'Yes' to the project [of Skopje's EU...