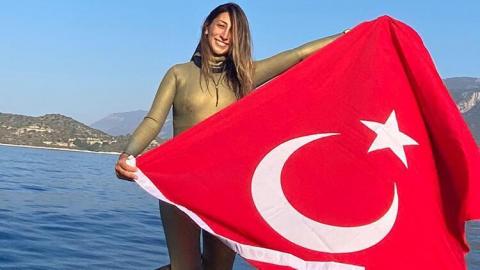 World record holder freediver Fatma Uruk has alleged that she faced mobbing and psychological pressure at the national team camp in the southern province of Antalya.

"I face psychological violence and discrimination by the federation at the national team camp. I write this post timidly, but I am writing it," the 33-year-old freediver said in a series of tweets she posted late on Oct. 3.

"I don't know what to write due to my sadness. Mentally and physically, I am broken. I will seek my rights," she noted in a tweet.

Stating that the head of the Turkish Underwater Sports Federation, Şahin Özen, wanted to have an in-person meeting with her after the first tweets, she accused Özen of collecting materials from other athletes to use against her.

"I heard him say, 'We have a photo showing her with a glass of beer. Send it to press.' Damn! I won't keep quiet," she posted.

Denying the allegations, Özen named Uruk's actions as an "assassination attempt to the national team."

"We want to form a unity here at the camp. She even hesitates to dine out with us," he said.

"I did not ask anybody to send her photos to press," he added.

Highlighting that Uruk is not acting as a national athlete, the federation head underlined, "She can leave the camp. We do not force anybody to stay."

Uruk set a world record in the women's Variable Weight Without Fins category after diving 72 meters in Yucatan Peninsula, Mexico, in 2020.

"Even the conditions in Mexico were better than the ones here at the camp," Uruk remarked in her last tweet.