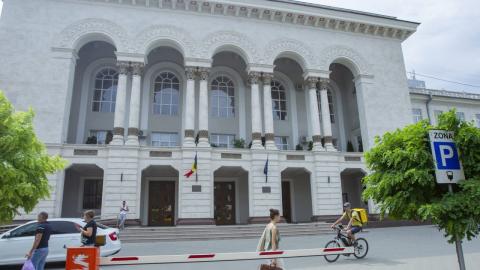 "We are returning to a 'captured' state," Stoianoglo said as he was escorted from his office by special forces, apparently referring to the period of 2015 to 2019 when the now fugitive oligarch Vlad Plahotniuc seemingly controlled all state institutions.

Stoianoglo was elected General Prosecutor in November 2019. However, critics said the contest for the post was rigged by the then-dominant Socialists.

The new pro-EU government has long had him in its sights. Justice Minister Sergiu Litvinenco said Stoianoglo had crossed a red line, using his function in his own interest and engaging in corruption and influence peddling.

"Stoioanoglo is desperate and is trying to victimize himself. But he is not the victim of politics, as he tries to present," he said. "We have a weak, illegally appointed prosecutor who has become a puppet in the hands of the corrupt and of the thieves who have been stealing from this country for decades," Litvinenco added.

The four charges accuse Stoianoglo of using confidential information during an investigation in his own interest after he published the wiretapped conversations of the former General Prosecutor, Viorel Morari, with different persons from NGOs and the media.

Before his detention, Stoianoglo was suspended from his duties after the head of the Security and Defence Commission in parliament, Lilian Carp, submitted a request for this to the Superior Council of Prosecutors, CSP.