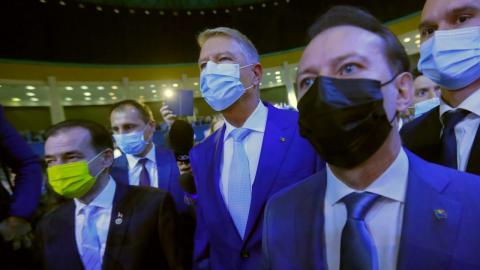 Romanian President Klaus Iohannis on Wednesday declined to rule out giving another prime-ministerial mandate to his close ally, Florian Citu, whose cabinet was ousted on Tuesday in a no-confidence motion.

Asked on Wednesday if Citu could be proposed again as PM, Iohannis replied that anyone who obtains a majority in parliament could be appointed.

On Tuesday, Iohannis said he would convene talks on a new government at his Cotroceni Palace office next week, after Citu's National Liberal Party-led cabinet was ousted earlier that day.

Iohannis said the delay would give all the parties sufficient time to develop a "mature approach" to the matter.

"We must find a solution; Romania must be governed. The pandemic, the electricity price crisis, winter is coming; someone must solve all these problems," Iohannis said, after his protegee lost his position as prime minister.

He added that Romania still faces a grave situation with COVID-19, as the number of daily deaths from the pandemic reaches 330.

However, political negotiations will start only next week.

Referring to the former PNL government's former allies in the Save Romania Union and the Party of Liberty, Unity and Solidarity, USR PLUS, Iohannis mentioned that it would be "difficult to negotiate with a former partner who voted to overthrow your government".

"Some have said they probably won't show up for consultations … Others have hoped to suspend the president. I don't see how the president's suspension will solve the situation. They probably want a circus show," said Iohannis, visibly irritated.

Asked if Ludovic Orban, Citu's main adversary, might be considered as a new PM, Iohannis replied, bitterly: "From what I know, party politics is done in party...