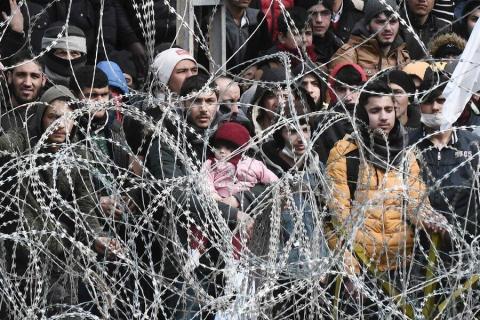 Migrants are suffering sometimes-violent illegal pushbacks carried out by special police units at the EU's borders, especially Greece and Croatia, an investigation published on Oct. 6 by media including Germany's Der Spiegel found.

The eight-month probe by journalists from seven countries uncovered a "system" run by "special units" who usually hide their identity by wearing unmarked uniforms and face-covering balaclavas, Spiegel wrote.

Videos of 11 pushbacks described by Der Spiegel allegedly show men beating refugees before bringing them back across the border into Bosnia-Herzegovina.

Six Croatian officials confirmed to the magazine that the images showed members of a special police unit.

Other videos and witness testimonies point to special Greek coastguard units detailed to intercept asylum seekers' boats in the Aegean Sea and set them adrift aboard orange life rafts, some paid for with EU cash.

Neither the Greek government, which has contested previous allegations of illegal pushbacks, nor Croatia's government responded to the journalists' questions.

"Far from being a few officers stepping over the line, these pushbacks make up an established strategy by the states, whose police forces are supported financially by the EU," Liberation wrote.

"Asylum-seekers' testimony is piling up in Greece, Romania and Croatia, gathered by aid groups, lawyers and journalists," the paper added.