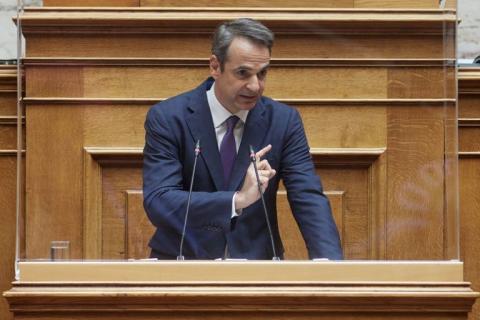 Prime Minister Kyriakos Mitsotakis staunchly defended the Greece-France strategic cooperation agreement - in the face of main opposition SYRIZA leader Alexis Tsipras' criticism on the limits of the mutual defence agreement as regards military assistance in Greece's maritime zones and the provision commits Greece to "advise, assist, accompany, and fight" alongside France in the Sahel region of Mali - in parliamentary debate on its ratification in Parliament today.

SYRIZA will not vote to ratify the agreement and Tsipras said that he will unilaterally revoke Greece's commitment regarding Sahel if he comes to power.

The PM opened his speech by stressing that the agreement will upgrade bilateral Greece-France cooperation in the areas of defence, security, and foreign policy.

"This historic document that has been tabled in Parliament renders today's debate historic as well," he said.

Regarding Greece's procurement of three French Belharra frigates - which is essentially the centrepiece of the agreement - Mitsotakis stressed that the deal secured for Greece "the best possible price with the greatest possible speed [of delivery]".

He maintained that the accord shields Greece in the turbulent Mediterranean and strengthens NATO's southern flank.

"The national advantages are clear to everyone. For the first time there is a provision for military assistance in the event that a third country will attack one of the two countries."

"We true Europeanists are called upon to become European pragmatists. As far...

"20 euros for pensioners tomorrow, for other citizens - on Wednesday and Thursday"

Airspace closed and ambassador recalled - all because of Macron's statement

Editorial To Vima: Between the Dark Ages and the Enlightenment

Pope Francis met with the Archbishop of Athens

GDP – Strong growth of 13.4% in the third quarter in Greece

Eurogroup – The next disbursement for Greece to be approved