Serbia Urged to Correct Schoolbooks Denying Croatian is a Language 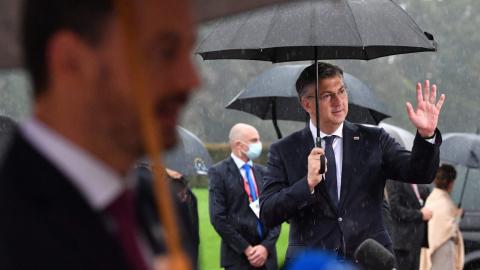 Croatian Prime Minister Andrej Plenkovic told Serbian President Aleksandar Vucic at a meeting on the margins of the EU-Western Balkans summit in Slovenia that he wants a school textbook that describes the Croatian, Bosnian and Montenegrin languages as versions of Serbian to be corrected.

"I told him to resolve this issue regarding the textbook that practically denies [the existence of] the Croatian language. That's not good and he's familiar with the issue. He said he would see what he can do," said Plenkovic, news outlet Telegram reported.

Plenkovic said on Tuesday that the Serbian textbook's denial of the existence of the Croatian language was outrageous and unacceptable.

"The [Croatian] embassy [in Belgrade] and the Ministry of Foreign Affairs have a clear duty to send protest notes to Serbia that this is unacceptable," he said, public broadcaster HRT reported.

"I expect Serbia to correct that, such anomalies in their textbooks, and I don't see what's the intention and with what kind of wisdom and sense that happened," he added.

Vucic told media on Wednesday that Plenkovic had raised the issue, and promised that the Serbian authorities "will look at it and consider it".

According to HINA news agency, a local Croatian-language weekly in Serbia's Vojvodina region, Hrvatska Rijec, reported that a grammar book for eighth-grade pupils says that the Serbian, Slovenian, Macedonian and Bulgarian languages are South Slavic languages while "Croats, Bosniaks and some Montenegrins call the Serbian language Croatian, Bosnian, Bosniak or Montenegrin".

The textbook was approved by the Serbian Institute for the Improvement of Education, a state education institution.

Croatia's Minister of Foreign and European...