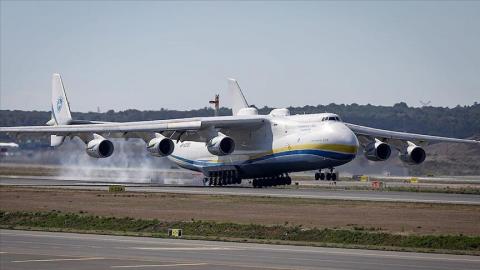 Istanbul Airport has witnessed a historical moment while hosting the world's two biggest planes, an airliner and a cargo plane, at the same time on Oct. 5.
"World's biggest cargo plane named 'Mriya' and world's biggest airliner, an Airbus A380 type jumbo jet, could be screened at the same photo-shoot in a rare event," airport officials said.
The An-225 type cargo plane "Mriya," which means "Dream" in Ukrainian language, landed at Istanbul Airport after it departed from Almaty, Kazakhstan, at noontime on Oct. 5 for fuel delivery.
At around 2.20 p.m., "Mriya" moved to the runway heading to fly to Linz, Austria.
It was then when the world's biggest airliner from Emirates Airlines was descending to land.
The airliner, which was carrying passengers from Dubai to Istanbul, was photographed with Mriya in a historical moment.
Mriya, which is a bigger version of Antanov An-124, is the only An-225 produced so far and has been in service since its first flight in 1988.
The biggest airliner, 560-tons weighing Airbus A380, completed its first test flight in 2005 in Toulouse, France.
The airliner has been in public service since its first commercial flight between Singapour and Australia in October 2007.