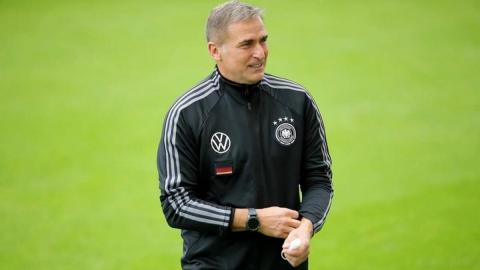 Former Germany U-21 coach Stefan Kuntz will face his first test as Turkey coach on Oct. 8 when his side hosts Norway in a 2022 World Cup qualifier Group G match in Istanbul.
Kuntz replaced Şenol Güneş last month following a humiliating 6-1 defeat against the Netherlands.
Despite a recent run of poor results in the group, including a home draws against Latvia and Montenegro, Turkey sits in third spot in Group G, two points behind the Netherlands and Norway.
Kuntz is determined to make best use of the remaining four games to boost Turkey's chances of winning a ticket to Qatar.
Turkish officials had talked about their plans to completely restructure football in the country, Kuntz said, adding that such long-term targets could wait.
"We will have much time after our upcoming four games," said the German, referring to Turkey's remaining games in the group.
"Hamit [Altıntop] and federation executives talked about things they want to change in Turkish football, maybe have a structure similar to the one in Germany," Kuntz said. "Such a system could be adopted to the conditions in Turkey, but it will take time."
Hamit Altıntop, a former Turkish international and a board member of the Turkish Football Federation (TFF), is currently in charge of the national team. Altıntop, who was born in Germany and who grew up in Schalke 04 football academy, was the name who chose Kuntz as Turkey's next coach, promising a major restructuring in Turkish football in the coming years.
But fans want immediate success, with pressure mounting on the national team not to miss the chance to be back in the World Cup for the first time in 20 years.
Kuntz said he was ready for the challenge.
"I want this pressure," he said. "That was what I wanted when I was...