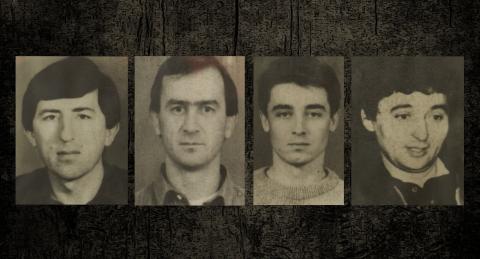 "There's no reason to worry. We were there [before], we saw how it is, now we will also have a [military] escort and we are safe."

This is what Snezana Amidzic's husband Zoran told her when they spoke on the phone not long before he died in October 1991.

Zoran Amidzic worked as a journalist for the Yugoslav public broadcaster Radio-Television Belgrade (since renamed Radio-Television Serbia) in Sabac, a small town in western Serbia. When war broke out in nearby Croatia, the station began to deploy him and his crew to report on the hostilities.

"He called me from the Hotel Bosna in Banja Luka on October 8, 1991, where they were staying," Snezana Amidzic recalled.

Her husband told her that they would go to the Yugoslav military in the Croatian town of Dvor na Uni, and that "they will provide us with security".

"However, the next information we received was at midnight on the 9th of October that they had been killed," she said.

Radio-Television Belgrade journalist Zoran Amidzic, cameraman Bora Petrovic, assistant Dejan Milicevic and a journalist from Radio Sabac, Sretan Ilic, died that day when they came under fire on the road between Glina and Petrinja in Croatia.

According to what is known about the incident, their car was hit by almost 300 bullets.

A couple of days after their death, Croatian nationalist tabloid Slobodni Tjednik published an article about them, calling them spies. The tabloid also printed documents that the media workers had with them when they were killed; these items were never returned to their families.

Three decades after the crime, no official investigation has been conducted, either in Croatia or in Serbia.