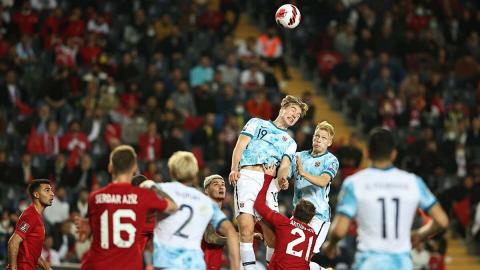 Turkey managed a 1-1 draw on Oct. 8 against Norway in a 2022 FIFA World Cup qualifying group match in Istanbul.

Turkish winger Kerem Aktürkoğlu scored the opening goal in the sixth minute after his team's pressure on Norway's defense at Istanbul's Ülker Stadium.

Aktürkoğlu was assisted by Cengiz Ünder.

But Norway leveled the score in the 41st minute as forward Kristian Thorstvedt finished in the far post.

Andreas Hanche-Olsen assisted Thorstvedt with a guiding header as Jens Petter Hauge crossed from the left after a short corner.

After a VAR (Video Assistant Referee) check the goal was valid.

In the second half, neither side was able to score and the match ended in an upsetting result for the home team.

Second-place Norway retained their advantage against Turkey in Group G as they have 14 points in seven matches.

The Netherlands are leading the group with 16 points after a 1-0 win against Latvia in Riga.

Following the draw in Istanbul, Turkey and Norway helped the Dutch team to the top spot.

Turkey has 12 points and is third in the group.

Only the group winners will automatically qualify for the 2022 World Cup. The runners-up in each group will face the playoff stage to fight for limited spots for Qatar 2022.

Montenegro are now hot on Turkey's trail with 11 points. Latvia still have five points and are desperate for the upper spots in the group.

Gibraltar lost all seven matches and is at the bottom of Group G.

In the next fixture on Monday, the Netherlands will host group underdogs Gibraltar in Rotterdam.

On the same day, Turkey will visit Latvia in Riga, and Norway will...