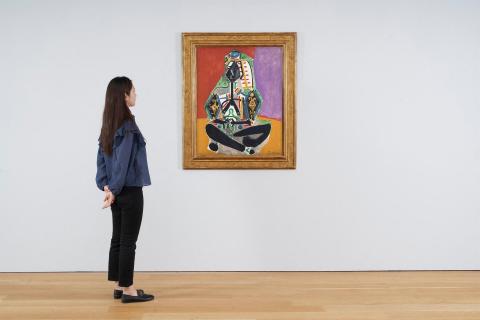 Two Picasso paintings, one of which has spent more than 60 years in a private collection and has never been auctioned, will be among the highlights of the November sale at Christie's in New York.

"Crouching Woman in Turkish Costume (Jacqueline)," which Christie's estimates to be worth $20-30 million, has been in the private collection of a single family since 1957, just two years after it was painted, the auction house said.

This oil on canvas is one of many portraits painted by Pablo Picasso of Jacqueline Roque, the artist's second wife, to whom he was married when he died in Mougins, in the south of France, in 1973.

It will be part of the "Stella Collection," which includes works by Joan Miro, Marc Chagall, Henri Matisse, Georges Braque and Max Ernst, which had also been in the same family's collection for three generations, said Christie's.

All the works will go under the hammer during the New York auction house's fall sale, from November 8-12.
Another Picasso painting, very similarly titled - "Crouching Woman in Turkish Costume - Jacqueline" - was auctioned off at Christie's for $30 million in 2007.

At the next fall sale, another painting by the master, "Musketeer with pipe," estimated at $30 million dollars by Christie's, will also go on sale.

Nebati: Solidification of inflation not expected