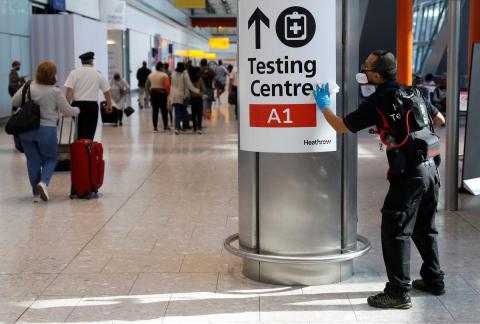 Fully vaccinated travelers from dozens of more countries, including Turkey, will not be required to self-isolate in the U.K. starting next week, the British government has announced.

The new rules, which will come into effect on Oct. 11, mean fully vaccinated individuals entering England from the 37 locations will be exempt from quarantine, a pre-departure test and a eight-day post-arrival test.

The U.K. recognizes the vaccines of AstraZeneca, Pfizer/BioNTech, Moderna and Johnson & Johnson, as well as their formulations such as AstraZeneca Covishield.

It will take off 47 more countries from the list from Oct. 11, leaving just seven countries with a complete travel ban.

Transport Secretary Grant Shapps said the move was possible because of "the increased vaccination efforts around the globe".

The U.K removed Turkey from its red COVID-19 travel list in September. Turkey has been on the red list since May.

Turkey, which started its inoculation program in mid-January, has administered nearly 112 million doses of the COVID-19 vaccines.

The country is using both the Pfizer/BioNTech and the jab developed by the Chinese firm Sinovac in its vaccination drive.

Additionally, some 11 million have been given the third dose of the COVID-19 vaccine.

"Turkey ranked seventh in the world in terms of the number of the coronavirus vaccine doses administered," Health Minister Fahrettin Koca said on Oct. 8, praising efforts by healthcare...