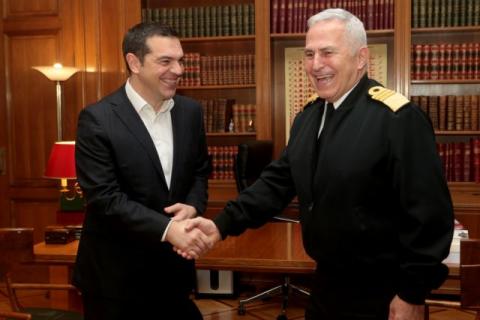 The former Minister of Defense, Vangelis Apostolakis, is keeping his distance from main opposition party SYRIZA, and according to a statement by Mr. Tsipras, a close associate of his, who in an interview is in favor of the Greek-French agreement.

Mr. Apostolakis, speaking on Vradini newspaper's Sunday edition, points out that the combination of frigates with Rafale aircraft is ideal and will have very good results in controlling the area and conducting operations.

"The choice is the best possible. The ship is excellent and it was chosen by us as well," he noted, emphasizing that "the Navy is entering a new era in the field of aeronautical operations ".

Asked about his possible candidacy with SYRIZA, he chose not to answer.

It is noted that, during the debate in Parliament on the Greek-French defense agreement, which SYRIZA voted against, Alexis Tsipras identified two serious problems in the agreement.

"The first problem is in Article 2. For the sea, where we have the escalation of challenges, it explicitly provides support for only 6 nautical mles. But Turkey does not dispute the 6 nautical miles, the crisis we had recently is due to the fact that Turkey disputes the EEZ and the right to extend from 6 to 12 in the Eastern Mediterranean. "If tomorrow we have violations in the EEZ that we recently declared with Egypt, will France be obliged to contribute?" the president of SYRIZA asked rhetorically, answering in the negative.

The second negative point, according to Alexis Tsipras, is Article 18. "The Sahel must really be supported. But by whom? By little Greece? And not with support troops but with combat troops?

It is noted that SYRIZA, despite the fact that the agreement provides for the assistance of Paris in case Greece...