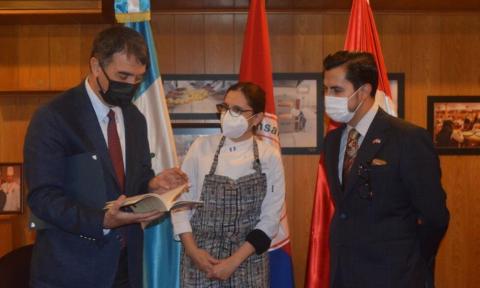 The food prepared by the visiting Guatemalan chef Euda Morales and Elif Denizci, a chef from Bilkent University, were presented during the event.

The ambassadors of Singapore, Finland, India, Montenegro and the Kyrgyz Republic participated in the event along with the rector of Bilkent University and local guests.

Guests were served the Guatemalan dish "Iguashte" with pounded coriander and dried hot pepper sauce, the main dish "Pepian" prepared with chicken, carrots and green beans, and the "Molletes" dessert, which is usually eaten on Easter holidays in the Guatemalan culture.

Guatemalan ambassador Jairo David Estrada Barrios stressed the importance of celebrating the 200th anniversary of his country's independence and expressed that this year they celebrated the 147th anniversary of bilateral relations between Turkey and Guatemala in his speech.

Barrios also mentioned that the book "Guatemalan Flavors are in Turkey" written by Morales has been the first Guatemalan cookbook that was translated into Turkish.

Guatemala is a country in Central America, with an estimated population of around 17.2 million.