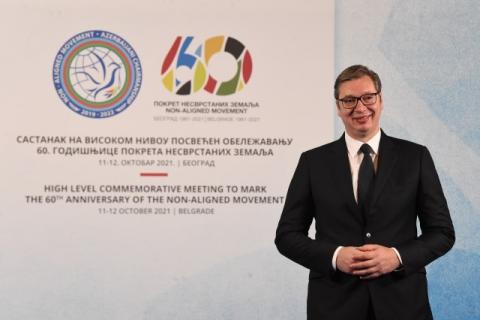 The first conference of the Non-Aligned Movement was held in the capital of the former Yugoslavia, which was one of the founders of that organization.
At the two-day gathering, Russia, which gained observer status in the Movement founded in the midst of the Cold War in July this year, will be among the non-aligned for the first time, as a counterweight to the opposing blocs led by the then USSR and the USA.
The first Non-Aligned Movement conference in Belgrade in September 1961 was attended by representatives of 25 countries, and was founded by Indian Prime Minister Jawaharlal Nehru, Egyptian President Gamal Abdel Nasser, Indonesian President Sukarno, Ghanaian President Kwame Nkrumah and Yugoslav leader Josip Broz Tito.
Conferences are held every three years in the country holding the presidency. Yugoslavia presided over the Movement from 1961 to 1964 and for the second time before the country's disintegration, from 1989 to 1992, when it was suspended from membership due to the war and the disintegration of the state.
In September 1989, Belgrade hosted the PNZ Summit, and numerous world leaders were hosted by the then President of the Presidency of the SFRY, Janez Drnovek, and the Minister of Foreign Affairs, Budimir Lonar. Belgrade returned among the non-aligned, as an observer, after the democratic changes in 2001, after the country was admitted to the UN under the name FR Yugoslavia.
In September 2011, Belgrade marked the 50th anniversary of the first Non-Aligned Summit with a major ministerial conference. The gathering was attended by about 100 foreign delegations with about 600 delegates hosted by then-Serbian President Boris Tadic and Foreign Minister Vuk Jeremic.
Participation in this week's gathering, which is being held...