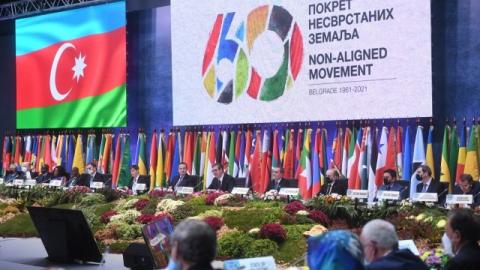 A two-day summit opened in Belgrade on Monday to mark the 60th anniversary of the first conference of the Non-Aligned Movement, established to create a third global bloc in a world polarised by the East-West Cold War.

Delegations from more than 105 countries and nine international organizations are taking part in the gathering, hosted by Serbia.

During the first day, some leaders criticized the accumulation of COVID-19 vaccines by rich Western countries, calling for more solidarity and a fairer distribution.

Azerbaijan's President Ilham Aliyev, chairing the summit via a video link, used his introductory speech, among other things, to speak about the global response to the COVID pandemic and express dissatisfaction with the way some rich countries are accumulating vaccines, calling it "vaccine nationalism".

Indonesian Foreign Minister Retno Marsudi said the challenges the world faced during the founding of the Non-Aligned Movement remained, and had even multiplied.

Marsudi said one of the principles of the Movement was equality between all states and nations and, like Aliyev, said access to coronavirus vaccines must be more equal. "We all need to cooperate when it comes to pandemic and climate change," Marsudi said.

The Secretary General of the UN, Antonio Guterres, noted via a video message that the gathering in Belgrade was taking place at a time of exceptional global challenges, and said the Non-Aligned Movement still had an important role in the world to play.

Guterres insisted that he had "been trying for a long time to push through the global vaccination plan" and added that the death of a huge number of people from COVID was due mainly to the unequal distribution of vaccines.

He also recalled other...