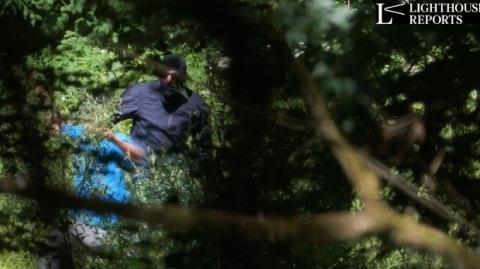 After a number of European media outlets published disturbing footage of a violent migrant pushback on Croatian territory last week, government officials condemned the incident - but insisted it was an act of individuals, not of the police as an institution.

On Wednesday, media outlets showed disturbing footage of men wearing balaclavas and clothes similar to those of Croatian riot police pushing migrants back across the Korana river towards Bosnia and Herzegovina.

Tajana Tadic, from Are You Syrious?, an NGO, told BIRN that she does not believe this is the case of a couple of individuals working on their own.

"This is just throwing those lowest in the hierarchy under the proverbial bus. Those who issued the orders are responsible. It would also be interesting to see if the Police Union will react to what's happening to their colleagues, to officers who are forced to perform illegal actions," Tadic said.

The union did in fact react, saying that the authorities had found a scapegoat who will "hang" for the bosses' well-being.

This came after Interior Minister Davor Bozinovic last Friday said he was shocked by the incident, which was probably an "individual offence by several police officers".

Nikola Milina, the police director, confirmed that three officers had been suspended from duty.

Bozinovic confirmed that genuine police officers were involved in the violence against migrants: "As soon as he saw the footage, the police director sent an expert team which worked very intensively. As far as I know, they established that those were police officers," he told Croatian reporters in Luxembourg, where he was attending a meeting of EU interior ministers.