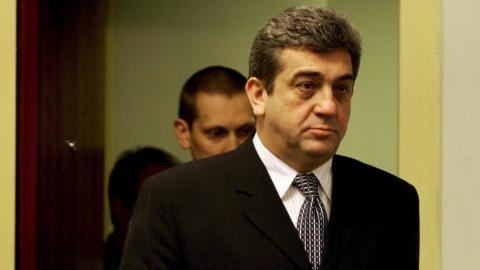 After UN officials repeatedly expressed concerns that freed war criminals have used media appearances after their release to deny atrocities, the Mechanism for International Criminal Tribunals has barred Serbian police general Sreten Lukic from denying any crimes committed during the Yugoslav wars as a condition of his release.

Lukic, who was released on Friday and has returned to Serbia, has also agreed not to speak to media and not to glorify other war criminals.

"I shall not make any statement denying the crimes over which the ICTY [International Criminal Tribunal for the Former Yugoslavia] had jurisdiction, and over which the Mechanism [for International Criminal Tribunals] retains jurisdiction, that were committed during the conflict in the former Yugoslavia," Lukic pledged in his conditional release agreement.

"I shall under no circumstances directly or indirectly express publicly any agreement with, or otherwise contribute in any way to, the glorification of persons convicted by the ICTY or the Mechanism," he added.

He also pledged that he "shall not discuss my case, including any aspect of the events in the former Yugoslavia that were the subject of my case, with the media, through social media, or with anyone other than my legal counsel recognised by the Mechanism" unless authorised in advance.

Jovana Kolaric from the Belgrade-based Humanitarian Law Centre said that the decision comes after repeated concerns raised in reports to the UN Security Council by the head of the Hague court and its chief prosecutor about media appearances made by freed war criminals.

Previous early release agreements, as in the case of former Bosnian Croat official Valentin Coric, have said that freed convicts should not speak to the...