Greece: More than 200 Houses Under Water after Flood on the Island of Euboea 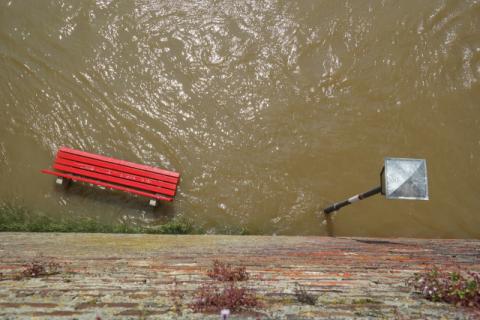 More than 200 houses were flooded on the island of Euboea after heavy rain on Sunday, Greek television channel Skai reported. According to the information, the heavy rain, which lasted for several hours on the island, led to the overflow of local mountain rivers.

As a result of the thunderstorm, which was named "Athens" by the Greek Meteorological Service, more than 200 houses were flooded and many sections of roads were flooded. The mayor of the village of Mantudi, George Tsapurniotis, spoke about the "dramatic situation in the villages of Agia Anna, Ahladi and Kotsikia".

According to the mayor, the water flow was so strong that in the city of Ahladopotamo it took a whole house from the shore to the sea. No casualties were reported. Deputy State Aid Minister Christos Triantopoulos said the state would help the islanders recover from the damage.

"We have already approved an emergency subsidy of 20 million euros," Triantopoulos said. Heavy rain also fell in the area of ​​the town of Zagora in the mountain Pilion (Central Greece), which is located near Euboea.

According to meteorologists, about 30 tons of water per hectare fell in the form of precipitation in the Zagora region per hectare, which also led to flooding of houses and landslides on the roads. The thunderstorm caused great material damage there. According to local authorities, a house was destroyed by a huge piece of rock that fell from the mountain.