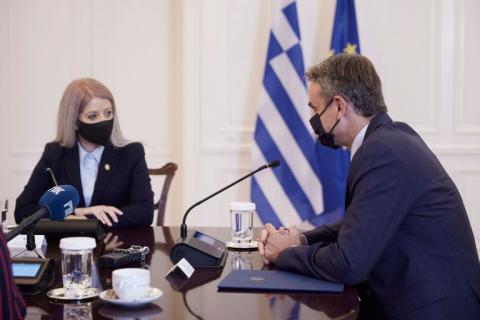 The meeting comes days after Ankara blocked the seismic research vessel Nautical Geo in Cyprus' Exclusive Economic Zone, the most recent of a string of provocations against Cyprus and Greece in the Eastern Mediterranean.

Mitsotakis said that a top priority for Greek foreign policy is to end the Turkish occupation of the island and reach a comprehensive settlement based on the UN framework, which provides for the creation of bi-zonal, bi-communal federation, with a single sovereignty (one state) and international standing, and a single citizenship, as provided in UN Security Council resolutions.

The PM said that the basis of a solution must be the UNSC resolutions and the EU acquis that must be enforced throughout the entire island. He stress that a solution is inconceivable without the abolition of the anachronistic Treaty of Guarantee of 1960 - which made the UK, Turkey, and Greece guarantors of Cyprus' independence - and the complete withdrawal of Turkish troops, which occupy 37 percent of the island's territory.

"I want to assure you once again that Greece and Cyprus remain absolutely coordinated in order to respond to Turkish provocations methodically, in an organised fashion, and always in line with international law," Mitsotakis said.

Tasoulas spoke of a further strengthening of inter...