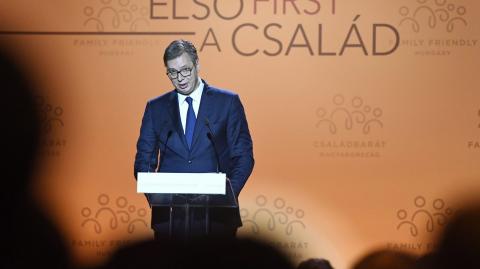 Vucic took to the stage, adjusted his suit, and read the room. In the front row were some familiar faces: Former US Vice President Mike Pence, the prime ministers of Slovenia and Czechia, Janez Jansa and Andrej Babis, Bosnian Serb leader Milorad Dodik and the man they had all come to see, Hungarian Prime Minister Viktor Orban.

It wasn't Vucic's first appearance at the Forum. Two years ago, he also addressed the event, blaming falling birth rates in Serbia on the selfishness of the urban population and boasting about the country's recent economic progress.

Then, Vucic's solution to encourage Serbs to have more babies was to "change the consciousness of the middle class", which was not responding to financial incentives, and to continue improving the quality of life for the poor by creating more jobs.

This time, Vucic had a different message. His speech was not about domestic incentives, but about foreign threats. Vucic blamed negative demographic trends on "liberal political Marxism", which, he explained, aims to change how individuals live and in doing so threatens the survival of nations.

Vucic painted a grim picture of "Marxist liberal circles" that entrap nations by forcing them to implement the rule of law or mitigate climate change, comparing it to a 'jihad' against disobedient countries. According to Vucic, such circles create the media environment that intentionally sidelines the real issue, which is the demographic decline. And his new fix for restoring birth rates? The disobedient countries must unite.

The drastic change in Vucic's rhetoric is an indicator of a deeper shift in his foreign policy, one that reflects his growing alienation from Western liberal countries and the search for an alternative in the emerging...