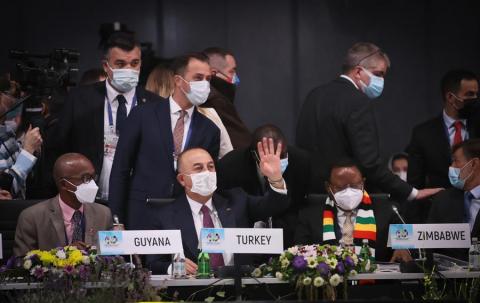 At a summit marking NAM's 60th anniversary in Serbia's capital Belgrade, Mevlüt Çavuşoğlu hailed the movement as the "voice of a just and inclusive world."

He stressed that the guiding principles of the movement "remain relevant" despite the significant changes in the world over the past six decades.

"Today's world is not that of 1961. The Cold War is over. A bipolar world has turned into a multipolar one. The challenges have become more complex," he said.

"However, the main principles of the Belgrade Declaration remain relevant. We support the voice of the Non-Aligned States of 2021 to become stronger."

Çavuşoğlu pointed out that the movement's first declaration signed in Belgrade in 1961 "called for action on mainly three areas: economic inequalities, U.N. reform, and a multilateral and inclusive approach on global issues."

"Isn't it dramatic that we still discuss all these issues today? First, inequalities are on the rise across the world. According to U.N. reports, rising inequalities negatively impact more than 70% of the world population," he said.

NAM highlighted the development and technology gap between economically advanced and less developed countries in 1961, he said, adding that the "divide is deeper now as technological changes are much faster."

Turkey hosts the U.N.'s Technology Bank for the Least Developed Countries to do our part, the minister said.

"Second, on U.N. reform, the Belgrade Conference called for the expansion of the U.N. Security Council. By saying 'the world is bigger than five,' we also call for a more inclusive and representative U...