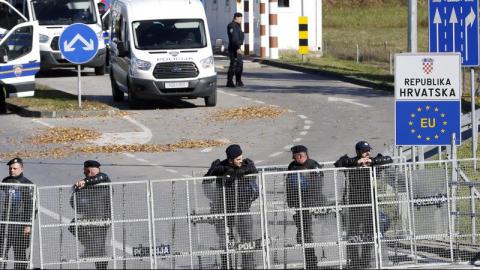 Establishing the Croatian border-monitoring mechanism has turned into a litmus test for the EU in its attempt to build an effective, comprehensive, lasting and humanitarian solution to an increasing number of EU member states, including Greece and Romania as well as Croatia, using pushbacks to halt migration flows. A joint investigation by European journalists on the Lighthouse Reports platform published Thursday uncovered evidence of special police units operating at the EU's borders, who often hide their identity by wearing unmarked uniforms and balaclavas, that carry out violent pushbacks.

Yet neither the European Commission nor Croatia's Interior Ministry disclosed any details of the border-monitoring mechanism's design after the agreement regarding its scope and mandate was reached on June 8.

A freedom of information request from the Centre for Peace Studies, a Croatian-based group supporting refugees with legal aid and litigating against pushbacks, has forced the disclosure of details about the mechanism, which raise serious questions regarding its independence and efficiency, and will add to growing criticism that the European Commission and Croatian Interior Ministry have opted for a political compromise.

A group of migrants attempting to cross into Croatia gather around tents erected near the Maljevac border crossing, Bosnia and Herzegovina, 25 October 2018. EPA-EFE/FEHIM DEMIR Experts needed