Day 2 of the Summit of the Non-Aligned Movement 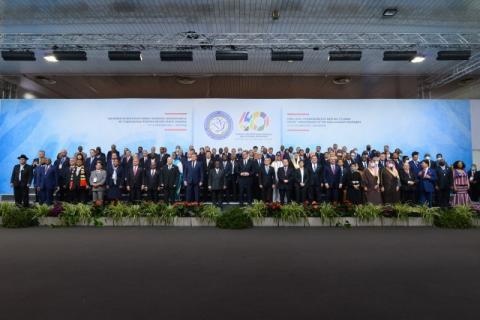 More than 105 countries, as well as nine other delegations from international organizations, gathered in the Serbian capital for a two-day gathering. The hosts of the gathering, which is being held at the Belgrade Fair, in memory of the Summit held on September 1, 1961, in Belgrade, are Serbia and Azerbaijan this year.
The two-day summit began on Monday with speeches by Azerbaijani President Ilham Aliyev and Serbian President Aleksandar Vucic, followed by a plenary session with delegations, which continues today. Other events are taking place in parallel, such as the Business Forum organized by the Serbian Chamber of Commerce.
With the words "welcome home", President of Serbia, Aleksandar Vui, started his address at the opening of the summit yesterday, and expressed hope that not only the past will be discussed, but also the future that we want to build together.
"The world of dialogue between compromise and peace is still possible and achievable," Vucic said. "The basic idea around which our predecessors gathered when they founded the Movement was peace. Peace is the basis for the development of cooperation, whether it is political or economic," he pointed out.
Among the participants are Ghanaian President Nana Akufo Addo, son of the first Egyptian president and one of the founders of the Non-Aligned Movement Gamal Nasser - Abdelhakim Gamal Abdel Nasser, President of the United Nations General Assembly Abdulla Shahid, about 40 foreign ministers, numerous special envoys from Asia and Africa, Latin America, and as special guests - Russian Foreign Minister Sergei Lavrov and Turkish Foreign Minister Mevlt avuoğlu. More than 3.000 members of the Ministry of the Interior have been engaged in securing the event.