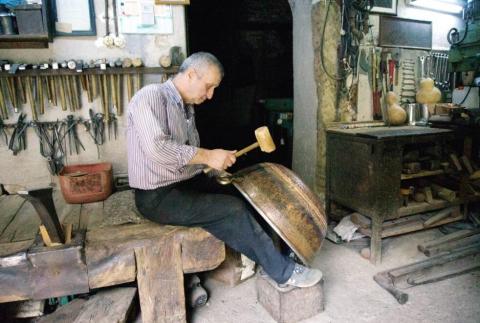 The last boilersmiths in Istanbul, who stepped into their father's shoes following his footsteps for four decades, say that they are unable to find an apprentice who would give them a helping hand and carry on the profession after them.

The Kaya brothers earn their living by repairing huge cauldrons of chocolate factories, pastry firms and pudding shops in the famous Ali Pasha Inn in the Fatih district of Istanbul.

"My father Mehmet became an employee near a boilersmith named Philip. In 1973, when Philip returned to Greece, my father took over the shop and the profession," said Osman Kaya, the elder brother of Hakan.

"I learned the job from my father. So did my brother. Now there is no one who we know interested in carrying out this profession," he noted.

Their siblings are also not interested in the job.

"Our children studied at universities and tended to do their own business," Hakan Kaya, the younger brother, said.

Underlining the fact about how hard the job is, he said, "As we work only with factories and big firms, cauldrons or boilers we repair are too big to carry."

But their search for finding an apprentice is ongoing.

"There is no one to fill our shoes and carry on the job after us," the elder brother said.