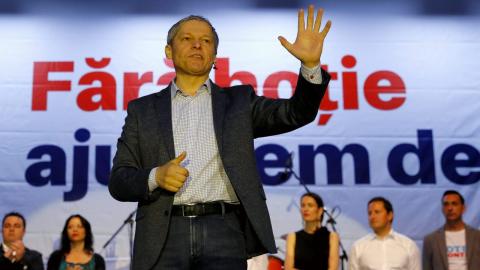 A week after the previous government was ousted, President Klaus Iohannis said on Monday that he has put forward Dacian Ciolos of the Save Romania Union, USR, as his choice for the next premier.

"I had consultations with the parties today after the no-confidence motion. During discussions, we reiterated the importance of issues that need to be resolved: the pandemic and rising energy prices," Iohannis told a press briefing.

Ciolos said the country is facing what he called a "moment of truth".

"We are in a time of crisis, and in such moments, politicians must take responsibility," he said.

His nomination came at the end of consultations on Monday at Cotroceni Palace between the head of state and the representatives of parliamentary parties. The USR was the only party that proposed a prime minister.

Ciolos aims to rebuild the former governing coalition with the national Liberal Party, PNL and the Democratic Union of the Hungarians in Romania, UDMR.

"Our goal is clear: to prepare a government which will pass through parliament quickly and can manage the crisis… I do not think these parties, the PNL and UDMR, will refuse because that would prolong the crisis," said Ciolos.

But political analysts in Bucharest said that Ciolos has little chance of assembling a majority to support his future cabinet.

Dan Tapalaga, the editor-in-chief of the G4Media.ro news website, said he believes President Iohannis is actually angling to get PNL leader and recently-ousted prime minister Florin Citu reinstalled as premier after Ciolos fails.

"The nomination seems purely formal. The proposal was made only to return later again with the Citu option or another PNL leader as prime minister," argued Tapalaga.