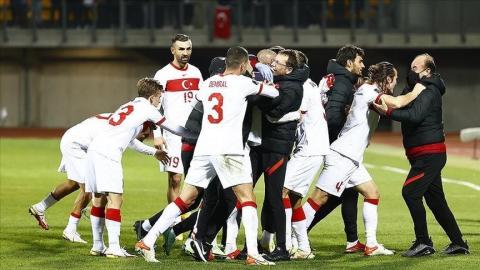 Turkey kept their 2022 World Cup finals hopes alive after securing a dramatic 2-1 win over Latvia in qualifiers on Oct. 11.

The first half ended goalless at Daugava Stadium in the capital Riga.

Latvia took the lead thanks to Merih Demiral's own goal in the 70th minute.

Turkey went on several occasions to score and finally in the stoppage time they were awarded a penalty following a VAR check.

Turkey increased their points to 15 and still have a chance to qualify for 2022 World Cup finals with two matches left in the qualifiers.

Having collected 19 points, the Netherlands sit top of the group after sealing an easy 6-0 win over Gibraltar at home.

Norway defeated Montenegro 2-0, now in the second spot with 17 points.

Gibraltar are at the bottom of Group G without any points.