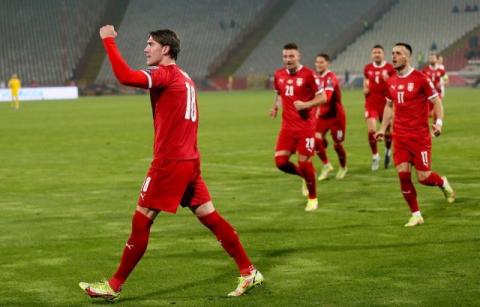 The "Eagles" have successfully completed the task entering the last month from the leading position of Group A, in which they will face a decisive match for a direct placement at the World Cup.
Duan Vlahovi took care of the new three points by scoring two goals (one from the penalty spot), while Emin Mahmudov took advantage of the amateur move of the goalkeeper Predrag Rajkovi at the end of the first half, casting a shadow on the triumph.
Things were straightened up by Vlahovi, and he could have entered the scorers list several more times if the guest goalkeeper ahrudin Magomedalijev hadn't been so brilliant.
All dilemmas, if there were any moments at all, were solved by Duan Tadi from the penalty spot seven minutes before the end. The national team of Serbia still has a point more than Portugal, holding the first position, but also a match more, so it will definitely have to celebrate in Lisbon in order to finish that race in the end.
And the World Cup will be "launched" in Qatar next year.
Serbia's coach Dragan Stojkovi managed to save the backbone of the team and resist the threats of suspensions of Duan Tadi, Aleksandar Mitrovi and Nemanja Gudelj, among the reserves tonight.
But that did not affect the game of the national team of Serbia at all, nor the final result.
Serbia has the playoffs in its hands, with the role of the holder, but we must not give up the main premium.
Regardless of the fact that Ronaldo's Portugal is our opponent in the final round.