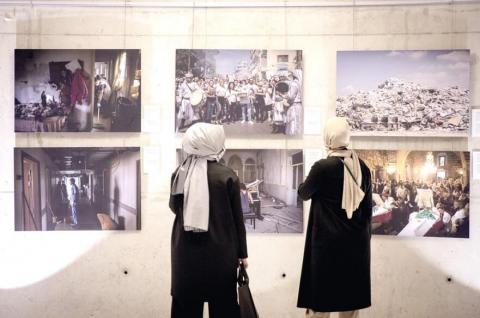 Anadolu Agency Chairman of the Board and Director-General Serdar Karagöz began his speech with a sound of intensive care unit to mark the story of the winning photo from Bangladesh.

"Mahmuda, 44, who is in quarantine, is trying to smell the birthday flowers left by his daughter from the other side of the door," Karagöz said.

He said the coronavirus pandemic, which affected everyone's lives, broke up many families and caused social isolation, also affected many participants' perspectives.

Karagöz emphasized the significance of photojournalism by saying: "A hundred years from now, the photograph will make people feel the same things."

On the fact that photographers won awards for their work in war, conflict, and disaster zones such as Azerbaijan, Syria, and Lebanon, he said photography has no borders.

Next week, the exhibition will take place in New York, he said, and hoped that it would also be organized in Japan and the other parts of the world if the pandemic conditions allow.

A selection of 74 photographs covering major events around the world over the past year is on display at the CerModern Arts Center until Oct. 24.

They include entries and winners of the news photography category of the awards, ranging from snapshots of the COVID-19 pandemic's impact on human life to disasters such as the August 2020 Beirut port blast.

The seventh edition of the awards and the exhibition are both organized by Anadolu Agency.