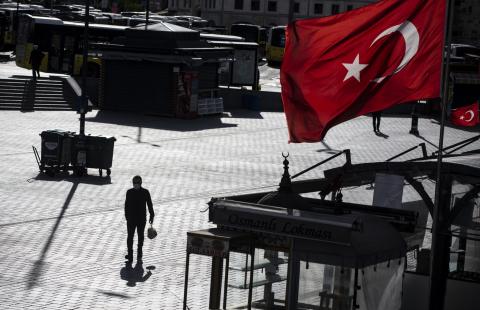 A man wearing a protective face mask walks under the Turkish flag during a curfew amid the ongoing pandemic of the COVID-19 disease caused by the SARS-CoV-2 coronavirus in Istanbul, Turkey, 23 May 2020. Photo: EPA-EFE/ERDEM SAHIN

"If I had turned the TUGVA documents into a news report, I would have given it the headline of 'The parallel state structure'," Cihan wrote on Twitter about the documents, which he shared on Twitter after a former TUGVA member leaked them.

TUGVA head Enes Eminoglu on Tuesday first denied the authenticity of the documents and then said that it was a smear campaign against TUGVA, claiming Cihan had links to terrorist organisations.

However, Eminoglu accepted the authenticity of the documents on Wednesday in an interview at the YouTube channel of Turkish journalist Cuneyt Ozdemir, saying: "The person who leaked these documents obtained them from the inside, backed them up and then leaked and exposed them."

The leaked documents include the names of people affiliated with TUGVA, their phone and ID numbers, their university of graduation and the name of the ministries, police and army branches to which they would like to be appointed - plus the dates of their interviews and the names of their "references," who are members of TUGVA, or Erdogan's ruling Justice and Development Party, AKP.

Another list also reveals that institutions closed and seized as part of a government crackdown on critics accused of supporting a failed coup attempt in 2016 were handed over to TUGVA and five other Islamist NGOs that have close ties to Erdogan's party and government.