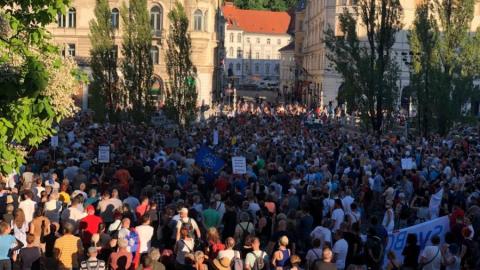 Ljubljana – Tensions were running high in Ljubljana as opponents of Covid-19 restrictions took to the stress for the fifth consecutive week, disrupting traffic. A police water cannon was at the ready as the police were trying to disperse the crowd blocking a major crossroads in the centre of Ljubljana.

Like the week before, the protesters gathered in the large square in front of the parliament building before heading on to proceed through the surrounding streets, carrying banners, whistling and chanting slogans against the Covid pass mandate and repression.

Unlike the week before, when the police repeatedly fired tear gas and water cannon against the demonstrators in a bid to disperse them as Slovenia hosted an EU summit, this time around the protest has largely unfolded peacefully, although the situation has been tense.

After their way was blocked by the police, the protesters became stranded at the crossroads at the innermost Ljubljana ring, in the vicinity of Hotel Lev. They failed to obey orders to disperse but riot police eventually got them to move back into the town centre and Republic Square where the protest started.

There has been heavy police presence, including mounted police, and a helicopter has been circling above the city centre. Police have had the water cannot at the ready at several locations, but have not used it, while they have used tear gas against individual protesters, media reports say.

POP TV has reported that the police have apprehended several protesters who have carried granite pavement stones.

Commenting on the developments at a session of a parliamentary committee, Interior Minister Aleš Hojs described protesters’ actions today as a “blatant violation of public peace and order”. He said the police would “remove them one by one from the public spaces” if need be.

Zoran Stevanović, the informal leader of protesters, has been spotted at the protest. In a statement for some media today, he blamed mainly police for the riots a week ago. But he called for peaceful protest as have the police.

Two weeks ago, the protesters blocked traffic in Celovška, the capital city’s main throughfare, and the Ljubljana motorway ring road. The police used tear gas and water cannon on that occasion as well.