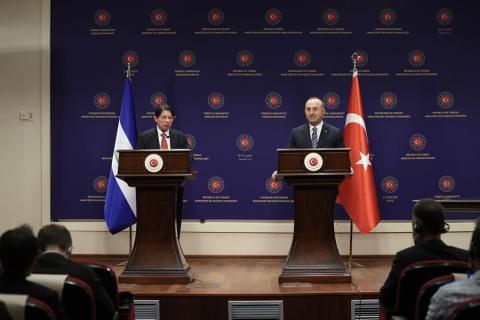 Stating that both Russia and United States are responsible for the YPG attacks, Foreign Minister Mevlüt Çavuşoğlu said Turkey would "do what is necessary for its security to clear northern Syria from "terrorists."

"We will do whatever it takes to clear these terrorists from these regions," he said on Oct. 13, speaking at a press conference with Nicaraguan Foreign Minister Denis Moncada Colindres.

He was responding to a question about President Recep Tayyip Erdoğan's recent remarks over an attack by the YPG that killed two Turkish police officers. This attack was "the final straw," and Turkey was determined to eliminate threats originating in north Syria, Erdoğan said on Oct. 11.

Recalling that Turkey had made separate deals with Washington and Moscow to withdraw the YPG members in Syria 30 kilometers away from the Turkish border, Çavuşoğlu said the U.S and Russia had not kept their promises. The U.S. condemnations of attacks on Turkey were insincere as Washington was arming and training the YPG, he added.

"If these promises were not kept, Russia and the U.S. are also responsible for the attacks, as they didn't keep their word. Now that these terrorists are here and ramping up the attacks, what we have to do is to take matters into our own hands," he stated.

"We will do whatever it takes to clear these terrorists from these areas," Çavuşoğlu added.

Turkey will do "whatever is necessary" for its safety, the minister said, noting that every move against the YPG was also important for Syria's border and territorial integrity.

Occupying roughly a third of Syria's territory with the support of the U.S., the YPG frequently targets Azaz, Marea, Al Bab, Jarablus, Afrin, Tal Abyad and Ras al-Ayn in the north of the country...