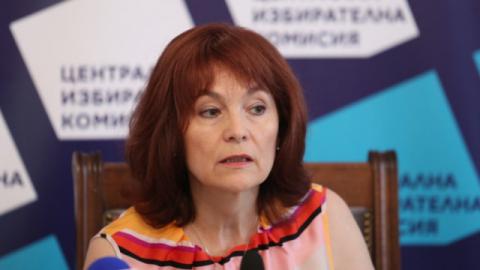 The Central Election Committee decided to confirm the decision of the Regional Election Committee-Stara Zagora to refuse to register the political party "Democratic Bulgaria" for the November elections. This was said by the CEC Deputy Chairwoman Rositsa Mateva.

"We are not talking about whether an electronic signature can be used in the 21st century to sign documents. We are talking about whether this is allowed under the Electoral Code and whether the EC is not a special normative act regarding the Electronic Signature Act. Ultimately, the CEC accepted that the documents were signed with the electronic signatures of the two representatives, but they were not submitted electronically, but paper printouts were brought to the REC-Stara Zagora on the spot. Instructions were given to the DB representative to certify them - true to the original - but he refused. The CEC accepted that unsigned documents could not be submitted under the Electoral Code. That is why we confirmed the decision of RЕЦ-Stara Zagora", Mateva explained.

She said the DB could now appeal to the Administrative Court.

Mateva also said that it is not true that in 7 more districts they want to remove the registration of DB.

"We are checking whether there are other district commissions in which documents with electronic signatures have been submitted," she said.

The CEC will make a decision after reviewing the files. The documents must be signed by party representatives.

"According to the Electoral Code and the latest amendments of May, I think they were exactly at the suggestion of this political force, the only option that uses an electronic signature to sign documents submitted in the election process is the signing of...