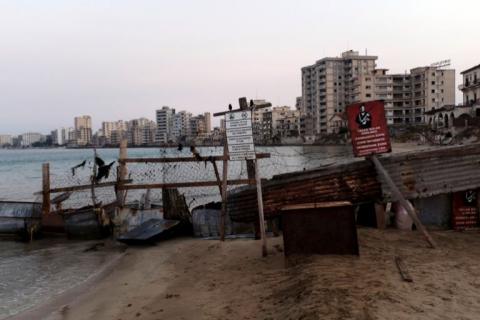 The Republic of Cyprus is turning to the permanent members of the UN Security Council (UNSC) - China, France, Russia, the UK, and the US - to brief them on Turkey's moves on the ground to re-open of the fenced-off seaside resort of Varosha (part of  the city of Ammochostos) in the Turkish-occupied area of the island, in violation of UNSC resolutions.

At the time of the 1974 Turkish invasion and occupation of of 37 percent of Cyprus' territory - Turkey maintains over 40,000 troops on the island to this day - Ankara had fenced off the city, which initially was to be a bargaining chip in negotiations for a Cyprus solution.

Since then, the UNSC issued a resolution providing for the handover of Varosha to the United Nations Peacekeeping Force in Cyprus.

Christodoulidis, said that both he and President Nicos Anastasiades are in the process of briefing EU partners and international players regarding yesterday's launch of works for the implementation of Turkey's opening of part of the city, which until 1974 was the jewel in the crown of Cyprus' tourism sector.

Turkish President Recep Tayyip Erdogan announced his intention while on a visit to the occupied territories on 20 July, 2021, for celebrations marking the 47th anniversary of the invasion, which left 200,000 Greek Cypriots who were uprooted and became refugees in the free territories.

France, as President of the UN Security Council at the time, issued a presidential statement on 23 July, 2021, condemning Turkey's stated intention as a glaring violation of UNSC...