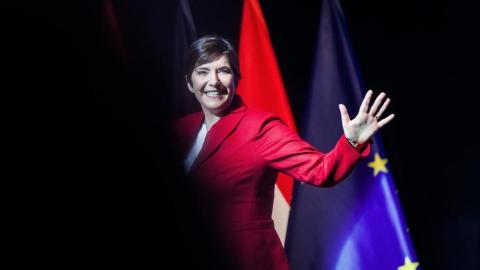 Peter Marki-Zay, the mayor of Hodmezovasarhely, speaks at an anti-government protest in downtown Budapest, Hungary, 01 May 2018. EPA-EFE/ZOLTAN BALOGH The candidates

Marki-Zay, who has managed to beat Fidesz twice in elections in his hometown, has a radically different world view from Dobrev: he is a devout Catholic with seven children, has a liberal free-market economic policy and, in many aspects like family policy, he seems to have more in common with Fidesz than with the left-wing opposition of which he is part.

His main asset is that he is a newcomer and portrays himself as a symbol of change. He is campaigning hard against Dobrev, arguing that only he can bring together all those who want to get rid of Orban - meaning not only people on the left, but in the centre and, perhaps, even lure disenchanted Fidesz voters on the right.

Yet Dobrev has her own strong points. She is a highly intelligent and accomplished woman, a persuasive speaker, tough campaigner, and boasts impressive experience for one who seeks to run Hungary. She holds a degree both in economics and the law, has served in the Hungarian public administration at various positions, and is currently the vice-president of the European Parliament. Being a mother of three and speaking four languages, she forms a picture of the almost perfect candidate.

Yet biographies are seldom perfect in Hungary. On the down side is her family background. Dobrev is married to Ferenc Gyurcsany, the former - and today still very controversial - prime minister and current chairman of the leftist-liberal Democratic Coalition.

Gyurcsany, who made his first millions as a businessman during the turbulent years after the collapse of communism, entered politics in the...