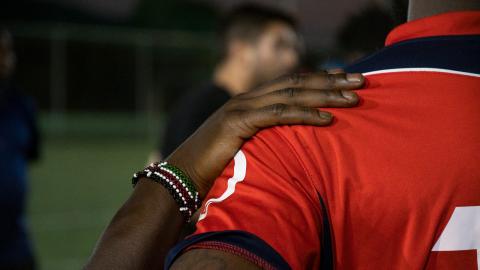 "When we focused on football and we started to play, the difference was obvious," Lazaridis told his team after the game. "We're going to shout. The city will hear us today."

The Greek Forum of Refugees is unique to anexartito.com - it's the only team made up of migrants and refugees in the league. Most of the players come from Nigeria, Cameroon, Congo, Ivory Coast and other African countries. Other players from Afghanistan and Iraq train with the team.

In their third year in the league, the Greek Forum is 12-0 on the season. But for many players, the team means more than football and a victorious record. The club, team officials say, represents all refugees and serves as a way for migrants to gain recognition and respect. "If you look at this team, it's not just about team," Jerry Bolum, the club's captain, said. "This is the only way we can express ourselves."

Bolum, 30, migrated from Nigeria to Greece in 2008 for what he called a better life and an opportunity to continue playing football. He's been with the team since the start, and says the club has developed into a way to give a voice to a group of people who largely lack representation in Greece.

'When we win matches, we gain respect'

The club is named after a grassroots self-advocacy organization established by refugees in Athens in 2010. The group aims to help migrants and...