History being rewritten at train station in Istanbul 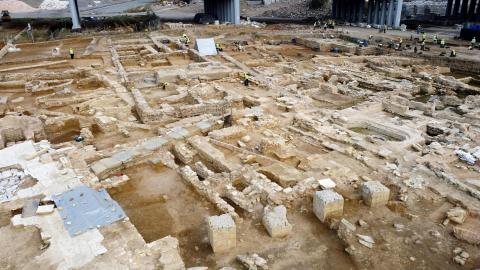 History is being rewritten with archaeological excavations at Haydarpaşa Train Station in Istanbul's Kadıköy district, which was known as Chalcedon (the Land of the Blind) in ancient times.

The excavations, which have been continuing for nearly three years, shed light on the history of Kadıköy from the 5th century BC to the early era of the Turkish Republic.

During the excavations carried out jointly by the Culture and Tourism Ministry and the Transportation and Infrastructure Ministry on 300 decares of land just behind Haydarpaşa Train Station, remains from the classical, Hellenistic, Byzantine, Roman, Ottoman and Republican periods were unearthed.

Speaking to Anadolu Agency, Rahmi Asal, director of the Istanbul Archaeological Museum, said they meticulously carried out the work in the area behind the train station with a large team.

"The area we work in is in the western port of Chalcedon, the ancient name of today's Kadıköy. Of course, very important remains and finds were unearthed. One of them is a private residence with opus sectile flooring. It's something we evaluate together with its bath dated 5th century A.D.," he said.

A 5th-century church built in the name of Saint Bassa was also discovered, said Asal, adding the skeletons of 28 people from that era were also unearthed.

"Approximately 12,000 gold, silver and bronze coins were recovered, which is an incredible figure, especially for Istanbul. The most important one is a coin that dates back to the 5th century B.C., which is thought to be one of the first coins of Kadıköy. The coin had been found before in other places, but it is the first time we've seen it in this area."

Asal said that Haydarpaşa Station is one of the most symbolic works of art of the...