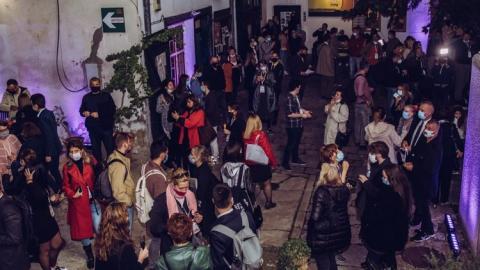 As tensions remain high between Pristina and Belgrade in the aftermath of unrest in northern Kosovo, the arts festival Miredita, Dobar Dan ('Good day' in Serbian and Albanian) is seeking to provide a platform for people from both societies to communicate and work together.

On Thursday, ahead of the opening of the festival in the evening, Kosovo was still reeling from violence that erupted the previous day when police conducted raids against suspected smugglers in the Serb-majority north; the unrest came not long after a border dispute that saw roads blocked by protesters and armed police units deployed.

"The political situation is always an obstacle. We live in a state of constant crisis, and the peaks of these crisis tend to happen just before or during the festival, as is the case this year as well," Fiona Jelici from the Youth Initiative for Human Rights, one of the NGOs organising the festival, told BIRN.

Jelici said that the festival, which runs until Saturday, is sometimes overburdened by expectations "that we will provide answers to all the problems between Serbia and Kosovo, that we will react to all the injustices that citizens are going through because of their ethnic backgrounds, and that we will resolve all the difficult issues of the legacy of the past".

"The festival is only one piece of the reconciliation puzzle," she continied, explaining that it provides a safe space for people to "meet, cooperate, discuss, exchange ideas, and present their work", while tackling the most difficult issues that remain unsolved in the frozen Kosovo-Serbia conflict such as missing persons or war crimes.

The first film to be shown in the festival is 'Hold Me Right', a documentary that explores the aftermath of sexual assault through...