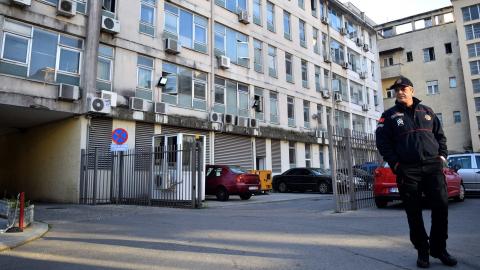 On January 21, Montenegrin police arrested five Montenegrin citizens, accusing them of preparing Belivuk's assassination. That day, an assistant police chief, Zoran Lazovic, said the police had constantly monitored Belivuk and Miljkovic during their visit to Montenegro.

Known as "Velja Nevolja" ("Velja the Trouble"), Belivuk led the "Janjicari", (Janissaries), later renamed "Principi", a notorious so-called football fan group formed in 2013, with connections to private security contractors and to officials, including a senior police adviser and the secretary-general of the then government.

An MP from ruling Democratic Montenegro, Danilo Saranovic, called on the prosecution to investigate connections between the former police management and the Belivuk gang.

"The point is not which police officer technically executed the order and lifted the ban on entry into Montenegro for Belivuk and Miljkovic. It is which former assistant police director ordered the lifting of the ban," Saranovic said.

Media reported that the prosecution opened the case after the Interior Ministry's secretary, Rade Milosevic, filed a criminal complaint of abuse of authority by the police officers.

Citing unformal sources from the Interior Ministry, media reported that Boskovic and Djurovic lifted the ban on the account of Border Police officer S.I. while she was off duty on sick leave. Media reported that the prosecutor is also questioning former assistant police head Enes Bakovic.

But, after the questioning of the police...