Temple of Zeus to regain former glory with new columns 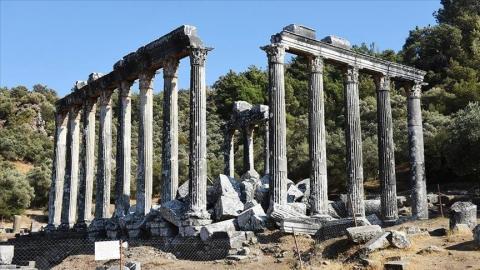 The Temple of Zeus Lepsynos in the ancient city of Euromos in southwestern Turkey will regain former glory with the resurrection of newly excavated columns.

Work is being done to make stand still missing columns of the temple, which was built in the second century B.C. in the Milas district of Muğla province.

"The Temple of Zeus is one of the best-preserved temples in Anatolia. One of our most important projects when starting the excavations was the rebuilding of the architectural blocks," Euromos Ancient City Excavation Director Abuzer Kızıl told Anadolu Agency

"By making this beautiful temple a little more magnificent, we will add it to the world's cultural heritage," said Kızıl.

He said broken pieces were found by searching hundreds of pieces, they were cleaned and damage removed.

"We use chrome rods to join the large architectural blocks," he said. "After we put the columns together, we will put them back in their original places with their pedestals as in the ancient period."

Currently, 16 columns are standing and 10 will be raised with their upper beams.

"We are lucky that the majority of the columns belonging to the temple are present," he said.

He underlined that his team has complied with international restoration rules without using modern materials.