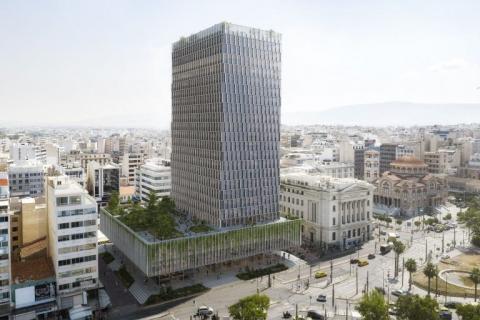 The first phase of the reconstruction of the Piraeus Tower was undertaken by TERNA SA, a 100% subsidiary of the GEK TERNA Group.

The contract, signed with PIRAEUS TOWER SA (cooperation of the companies "DIMAND SA", "European Bank for Reconstruction and Development - EBRD" and "Prodea Investments SA"), which has undertaken the refurbishment of the Tower with the Concession System from the Municipality of Piraeus, provides for the dismantling of the existing facade and the installation of new glass curtain walls with blinds.

The project budget is around € 19 million (including VAT).

The Tower of Piraeus is the second tallest building in Greece, after the Tower of Athens and consists of 24 floors and 2 basements, while the height of the building is 84 meters.

The project as a whole concerns the completion and operation of the Piraeus Merchant Shipping Center, known as Pyrgos Piraeus, with planned use of offices, restaurants and underground parking in a total built-up area of ​​34,623.74 sq.m.

It is worth noting that the development will involve a bioclimatic office building that aims to receive certification for sustainable development under the Leadership in Energy and Environmental Design (LEED) certification program at GOLD level.

The new project is to be added to a series of important private construction projects carried out by TERNA in Greece and abroad.