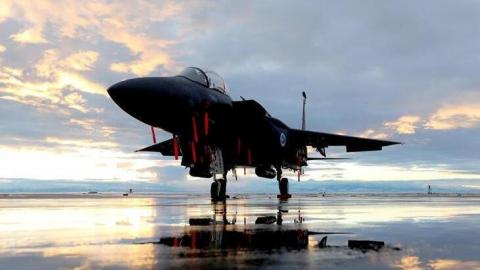 Fifteen F-15E aircraft belonging to the U.S. Air Forces have arrived at an airbase in Greece in support of a multinational training event on the eve of the signing of the updated new protocol of the Defense Cooperation Agreement (MDCA) between Athens and Washington.

The aircraft will support Operation Castle Forge, which will be carried out within the framework of the military cooperation in the Black Sea region.

The Castle Forge exercise aims at increasing interoperability with NATO allies in relation to the U.S. collective defense strategy in the Black Sea region and improving the ability of joint forces to respond flexibly in times of crisis, the Greek Air Force said in a statement.

"The components of Castle Forge ensure that forces are rapidly dispersed and continue to provide air power from locations with different levels of capacity and support, ensuring that the air force is always at risk of potential threats," the statement said.

In the statement, it was noted that the Castle Forge exercise was designed for the US collective defense strategy in the Black Sea region, designed to increase interoperability with NATO allies and to improve the ability of joint forces to respond flexibly in times of crisis.

Romania, Bulgaria and Canada will also participate in the exercise as well as the United States, according to the statement.

Greek media claimed that it is of great importance that F-15 aircraft arrive in Larissa to conduct joint exercises with the Greek Armed Forces before the updated new protocol to be signed by the U.S. and Greek foreign ministers, Antony Blinken and Nikos Dendias, respectively.

The new protocol envisions the U.S. to increase its military presence in Alexandroupoli (Dedeağaç), especially...