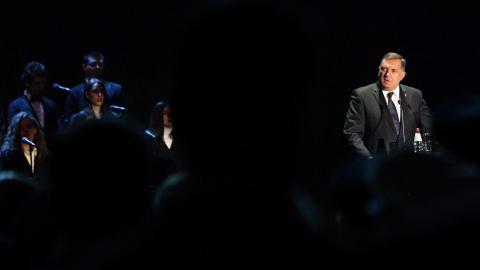 Dodik blaming foreign powers for the tensions in Bosnia, accused them of wanting to create "a Muslim state" and warned that any move by the European Union to exclude the Republika Srpska from its initiatives in the country would only "cement the independence" of the entity.

He announced the takeover of military barracks in Republika Srpska, which are now managed by the Bosnian Armed Forces, along the model of Slovenia when it seceded from federal Yugoslavia in 1991. Everything would be peaceful, he said, despite the fact that dozens died during 10 days of fighting in Slovenia before the Serb-dominated Yugoslav army withdrew.

He said that a survey among soldiers in the Bosnian Armed Forces indicated strong support among Serbs for joining a Republika Srpska army, claimed that the Republika Srpska could count on Chinese support and revealed that he had requested support from Russia in the event the EU cut off its financial assistance.

BIRN took a closer look at the veracity of Dodik's claims.

Can entities reject decisions taken by the High Representative?

Addressing reporters, Dodik said that within days the Republika Srpska parliament would decide on withdrawing consent for the reform of the army, the High Judicial and Prosecutorial Council, HJPC, the fiscal system and other institutions.

"We shall pass laws declaring null and void and inapplicable the laws of Bosnia and Herzegovina which have been imposed by any High Representative ever," he said. "In the territory of Republika Srpska, this includes around 140 laws, including the law on the court, prosecution, SIPA, intelligence service and others, and the...