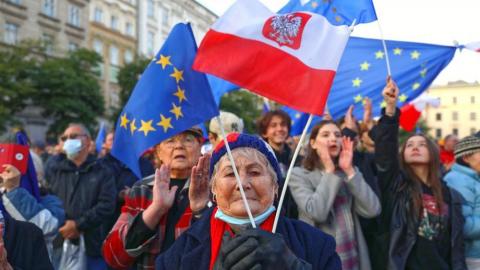 Ten member states as well as the European Commission itself will be opposing the Warsaw-Budapest tandem, who argue that the definition of the rule of law is too vague and the mechanism merely replicates the already ongoing Article 7 procedure, but gives Brussels more room for manoeuvre while also scrapping the right of veto by member states.

Highlighting the importance of the issue, all 27 CJEU judges will participate in the deliberations, which began this week. Even though the court is applying an accelerated procedure, a ruling is not expected until early next year. However, the Advocate General of the court will issue an opinion on December 2, which can be taken as guidance on how the court will ultimately rule.

Hungarian Justice Minister Judit Varga called the EU's new rule-of-law provisions "ideology-based political witch hunts". She wrote in a Facebook post that the EU "created unilateral accusations instead of dialogue, unresolvable conflicts instead of mutual understanding, and has become a tool for political self-interest instead of a democratic exchange of views."

Meanwhile, the fallout from the Polish Constitutional Tribunal ruling on October 7 that some key EU Treaty articles are incompatible with the country's constitution rumbles on.

President of the European Commission Ursula von der Leyen told fellow Commissioners on Wednesday that in response to the Polish Constitutional...