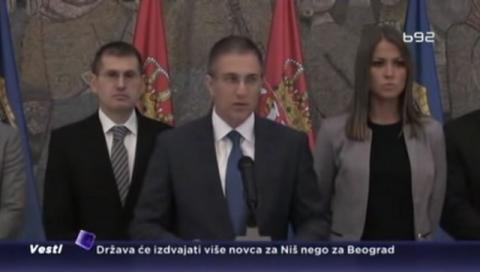 The interrogation of Hrkalovi is underway, they say.
She was detained on suspicion of removing evidence after the murder of Vlastimir Milosevic in Queen Natalija Street.
According to media reports, her official hearing began at 8:30 p.m. Hrkalovi was escorted by the police to the building of the Special Prosecutor's Office in Belgrade in Ustanika Street.
According to the media, she was first taken to her apartment where the search took place.
My client Dijana Hrkalovi was summoned to the Internal Control Department today at 3 p.m. At around 5 p.m., we came to the police department together and shortly afterwards she was arrested. Dejan Kovaevi (former head of the Criminal Police Directorate) was also in the Internal Control Department at that time. The decision on the arrest was handed over by the police officer I.P. From there, Hrkalovi went to the apartment where the search was carried out, which ended at 19:20", says lawyer Nenad Tasi.
Hrkalovi will now be questioned before the Deputy Prosecutor for Organized Crime, and according to some media, the reason is the case of the murder of karate fighter Vladimir Miloevi, for which Veljko Belivuk was accused and then released.
This is a case of murder on the rails in 2017, when karate fighter Vlastimir Miloevi was killed. The main suspect in the murder was Veljko Belivuk, better known as Velja Nevolja, but he was eventually released because the evidence disappeared.

"Murder on the rails"

During the guest appearance of the President of Serbia, Aleksandar Vui, in a television show in mid-July this year, a disturbing video of the murder of Vlastimir Miloevi on tram rails in Belgrade, on January 30, 2017, was shown.
The murdered Milosevic, otherwise an athlete,...