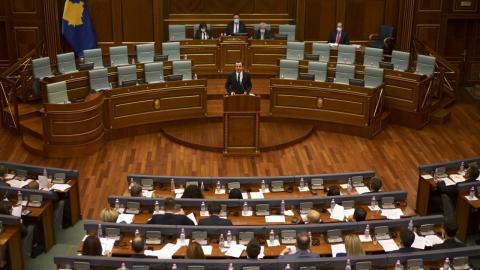 An anti-smuggling operation conducted by police on Wednesday in several cities in Kosovo saw violence erupt in Serb-run northern Kosovo.

The Belgrade government has called the operation a disguised provocation aimed at the Serbs in northern Kosovo, especially after one Serb was shot by police during clashes with protesters. Kurti insists it was a regular police action aimed at curbing crime.

Rakic, Minister of Local Government, provocatively compared the police action to the Nazi German "Kristallnacht" of November 1938, when Nazis all over Germany wrecked Jewish businesses and torched synagogues.

The statement was criticized by Germany's ambassador to Kosovo, Jorn Rohde, who called the comparison "unacceptable".

Under Kosovo's constitution, the government should have at least one minister from the Serbian community and one from the other non-majority communities.

Srpska Lista is the most voted-for party among the Kosovo Serbs and holds all ten seats reserved to the Serbian community in Kosovo's parliament, therefore its leader is the Serbian minister in Kosovo's government.

Srpska Lista, which has strong support from Serbia's government, will also participate in Sunday's local elections.