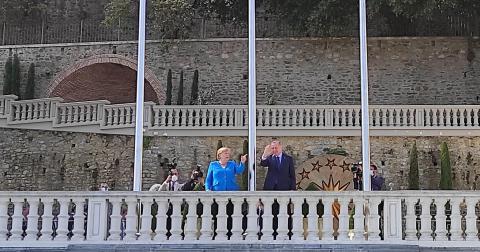 German Chancellor Angela Merkel arrived in Turkey on Oct. 16 for talks with President Recep Tayyip Erdoğan before leaving office after 16 years in power.

Merkel on arrived at the Huber Mansion in Istanbul to meet with Erdoğan.

Merkel and Erdoğan boarded a golf cart and visited the beach area of the mansion.

Standing next to the flags of Turkey and Germany, the two leaders greeted local and foreign journalists in the area.

Later, the two leaders left the area for the scheduled meeting.

Merkel's visit to Istanbul has taken place ahead of an EU leaders' summit in Brussels on Oct. 21 and 22.

"Ties between Turkey and Germany will be reviewed in all aspects in the Istanbul meeting," the Presidency's Directorate of Communications said in a statement on Oct. 15.

"Steps to develop the cooperation between two countries will be discussed," it added.

The latest developments in Libya, Syria and Afghanistan will also be on the agenda of the talks between Merkel and Erdoğan.

In a press conference on Oct. 10, Steffen Seibert, Merkel's spokesman, said, "Turkey is a very important and close partner for us. The two leaders will discuss a wide range of international and regional issues, including the EU-Turkey cooperation on migration management and refugee protection."

After 16 years in power, Merkel is preparing to leave active politics later this year, but she will remain in her post until a new coalition government is formed.